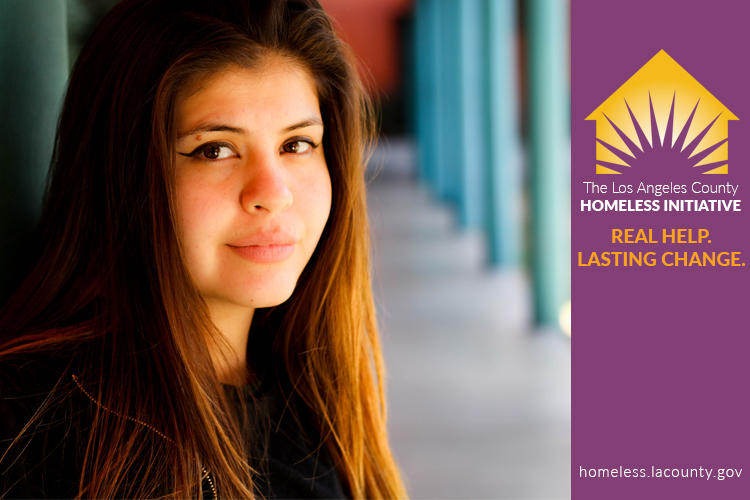 Looking back on it now, Eustolia Farias thinks it was inevitable that she would wind up homeless at a young age.

Her mother took off when she was a toddler. Her father worked long hours at a garment factory, but barely earned enough for rent. She and her younger sister fought so violently that their neighbors near MacArthur Park complained.

“I felt kind of neglected and started rebelling,” Farias recalled. “My dad was always at work, we never had any money, and I just did not want to be at home.”

In seventh grade, she began running away and hanging out with gang members for months at a time. “It was such a rush,” she said. But eventually, a stint in juvenile hall for a Venice Beach robbery became Farias’ wakeup call.

“Emotionally, I began feeling the pain,” she said. “My conscience was telling me ‘You can do better than this. It’s not right, hurting other people.’ I was mad at the world.”

Today she and the world are getting along just fine.

At 24, she’s working two jobs, planning a career in aircraft welding and—perhaps most remarkable of all—is about to move into her own apartment in Hollywood, with a voucher that will help her pay the rent.

In a region where thousands of young people are homeless on any given night, Farias can be considered a symbol of all that can go right.

She is one of 257 young people who were moved off the streets through an ambitious campaign by the county and its non-profit partners to house 100 homeless youths in 100 days.

Farias owes her good fortune to one of those non-profit partners, Covenant House, an organization that tends to the needs of at-risk and abandoned homeless youth. She spent a month in the group’s shelter, then moved to a transitional living program that offers therapy, education and job training.

Her story is a bright light in a county with more than 3,500 homeless teens and young adults and a perpetual shortage of shelter beds.

It shows how much can be accomplished when counselors get creative, bureaucratic barriers fall and community partnerships take root.

The housing process is not as simple as scooping kids from the street and shoe-horning them into slots.

“It requires a lot of patience and communication,” said Caitlin Crandall, who’s been working with homeless young people for eight years through LA Youth Network. “They are used to feeling unloved and walking away.”

Some are runaways, orphans or victims of abuse. Hundreds have aged out of foster care or churned through the criminal justice system. Others are mentally ill or addicted to drugs. And some have simply been priced out of housing by rising rents and shrinking vacancies.

Many have been couch surfing for years, avoiding the stigma of being seen as “homeless” but not the suffering. Almost 30% of homeless young people rely on couch surfing to avoid sleeping on the streets, according to statistics gathered during the recent youth housing campaign, known as the 100-Day Challenge.

“I’ve never been in stable housing,” said Reejaunte Smith, 23. Her mother’s long-term struggle with addiction turned them into vagabonds, she said. She’s slept in cars, lived in a tent near the 110 Freeway and taken refuge in an abandoned house with no water and spotty electricity. As she entered adulthood, she tried to find ways to stay under the radar.

“A lot of us, we’re out here alone. We can’t go to our parents for help,” Smith said. “So you spend your days calling around, begging somebody for space.”

Despite the challenges, she found a job at the Brotherhood Crusade and enrolled in Trade Tech to study fashion design. But she flunked out because she couldn’t keep up with her art supplies when she was frantically moving around.

“There’s no telling how I would be surviving right now,” she said, “if I hadn’t found someone to offer me a home.”

That home is a studio apartment near Watts. It’s small and furnished with castoffs, “but it’s mine,” she said, “and I’m very appreciative of that.”

Her housing was arranged through Sanctuary of Hope in South Los Angeles. “We do a lot of door-knocking,” agency director Janet Kelly said. “Our biggest challenge is finding landlords willing to take a chance on our young people.”

The young people receive financial help to cover the cost of rent. But many landlords refuse to deal with the red tape those subsidies require.

The county has mounted its own campaign to bring more landlords onboard. And nonprofit partners are working hard to find ways around roadblocks.

Those efforts intensified during the 100-Day Challenge, and stretched into every corner of the county.

In the San Gabriel Valley, officials reached out to churches and neighborhood groups to line up rooms for rent. In the San Fernando Valley, counselors helped link homeless teens to family members who would take them in.

In Hollywood, teams worked with mental health experts and the public defender to improve outcomes for young people who have passed through the criminal justice system. In Venice, outreach workers connected young transients and runaways to shelters and services.

In the South Bay, short-term vouchers helped young people with low-paying jobs move into apartments. In East Los Angeles, crews scoured parks and community colleges for youths who were showering on campus and sleeping in cars. And in South Los Angeles, young adults were ferried from cold streets to warm shelters at night.

Still, housing slots are scarce. For every eight youths needing a place to sleep, only one shelter bed is available, outreach workers say. And a shelter is no substitute for a stable home.

“But when you have 300 folks on your waiting list and 50 housing options, that’s a real mismatch,” said Ishimine Caldwell of Ruth’s Place, a resource center for homeless young people in South Los Angeles.

Even getting a handle on the number of young people experiencing homeless can be challenging. That’s why the recently-concluded Greater Los Angeles Homeless Count also includes a special “youth count” as part of its census.

And this year, among those on the street counting was another young person whose life has taken a turn for the better, thanks to the 100-Day Challenge. Carl Till–who was homeless for 18 months after a stint in juvenile hall–recently moved into his first apartment, a two-bedroom place in Inglewood that he shares with another formerly homeless young man.

Hathaway-Sycamores Child and Family Services, another of the county’s non-profit partners, helped Till get a roof over his head—and a future to look forward to.

“It’s amazing,” Till said, “how much more motivated I feel.”

How the homeless count is going high-tech