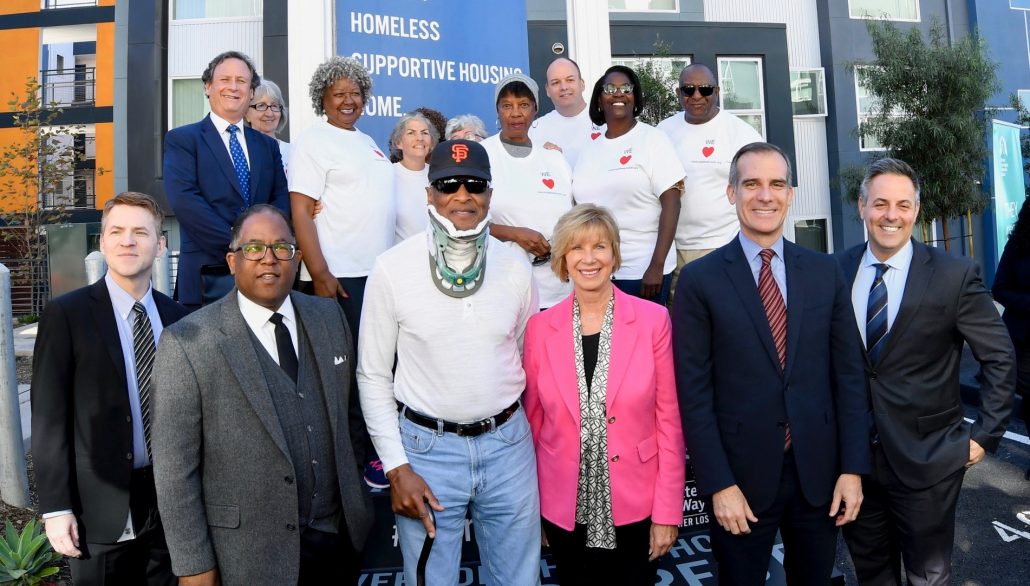 Standing in the courtyard of a brand-new affordable housing apartment building, LA City Mayor Eric Garcetti, LA County Supervisors Mark Ridley-Thomas and Janice Hahn, and Los Angeles City Councilmember Joe Buscaino announced that tens of thousands of families and individuals throughout Los Angeles County have been placed in permanent homes and interim housing since voters approved landmark initiatives to combat homelessness, and they encouraged everyone to help sustain this progress by volunteering for the 2019 Homeless Count.

Joined by officials from the Los Angeles Homeless Services Authority (LAHSA), they addressed an audience that included service providers, longtime Homeless Count volunteers (including several who had formerly been homeless themselves), and residents of the Harbor Gateway area’s newly-opened 127th Street and El Segundo Boulevard Apartments, a 160-unit apartment complex that includes the kinds of supportive services that Angelenos voted for by landslide numbers with 2016’s Prop HHH and 2017’s Measure H.

“Thanks to Measure H, we have collectively housed almost 10,000 men, women and children — and that’s just over the last 15 months,” Supervisor Mark Ridley-Thomas said. “There’s more work ahead of us but this is tangible progress and a sign that we should redouble our efforts. As we head into the season of giving, let us roll up our sleeves, open our hearts and extend our hands to help our unhoused neighbors.”

“Nearly two years ago, we made a bold promise to voters: that with Measure H funding we would be able to help lift 45,000 out of homelessness in five years,” said Supervisor Janice Hahn. “Today, we are well on our way to delivering on that promise.”

Other measurable progress due to Measure H includes:

The progress report accompanied the launch of the call for volunteers for the 2019 Greater Los Angeles Homeless Count, which LAHSA will conduct from January 22-24, 2019.

“Homelessness is the most pressing issue facing L.A. today — and we can only end it if everyone steps up and works together,” said Mayor Eric Garcetti. “We have made encouraging progress in this fight over the last year. But the work is far from over, and we must keep pushing forward. That’s why it is so important to sign up and volunteer for the 2019 count.”

More than two dozen facilities totaling 617 housing units have been funded since the November 2016 passage of the $1.2 billion Prop HHH, including 417 permanent supportive housing units and 187 affordable housing units. As those continue to come on line, the City of Los Angeles has launched A Bridge Home, designating city-owned real estate to help people come off the streets more quickly. A Bridge Home has already opened sites in Hollywood and Downtown.

“Every year, Los Angeles County residents by the thousands spend a couple of January nights walking the streets where too many of our homeless neighbors live,” said Peter Lynn, Executive Director of LAHSA. “These efforts help us recognize the scale of our crisis and the specifics of our fellow Angelenos’ lives. And they come on top of admirable work throughout the years to lessen those neighbors’ burden—whether by showing up to support locating affordable and bridge housing in their communities, helping win new resources to address this crisis at scale, or helping their fellow Angelenos with donations and care.”

Thousands of volunteers sign up to join the Homeless Count every year, reaching 8,500 in 2018. Volunteers receive training and walk designated areas in small groups. LAHSA accompanies the street count with institutional counts, demographic surveys, a youth count, and statistical analysis in partnership with the University of Southern California that fully develops our picture of homelessness. Volunteer registration for the 2019 Homeless Count is live at www.theycountwillyou.org.

For the first time in years, LAHSA reported after the 2018 Count that homelessness had begun to fall, decreasing by 4 percent to 53,195. However, this drop came on top of record placements of 16,800 Angelenos in housing—suggesting that more and more Angelenos were falling into homelessness due to record housing prices and other factors, even as efforts to reduce homelessness began to gain traction,

Daily Breeze: Los Angeles officials say strides are being made in the ongoing battle against homelessness