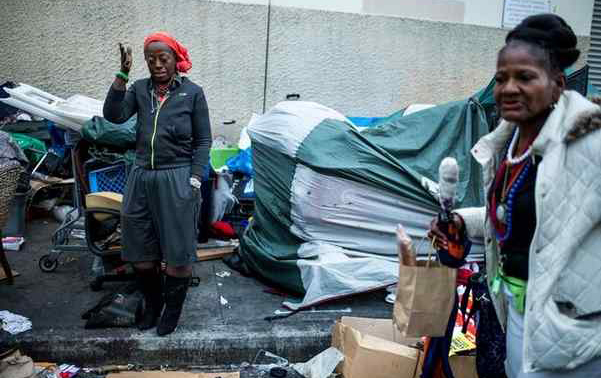 A snapshot of where homeless people sleep in 210 communities across Los Angeles County was released Friday, and showed that skid row posted the highest population overall while several communities such as San Marino reported no one who was homeless at all.

The detailed data were released by the Los Angeles Homeless Services Authority two months after the agency announced that homelessness across the county had grown to almost 50,000 people, a 23 percent increase this year compared to last year. The data were provided by a count conducted in January by more than 7,000 volunteers across every census tract in the county.

• DATA — See where the homeless are sleeping in your community

A look at some communities show that in 2016, many people slept on the streets, but that trend shifted and more people were found to be living in their RVs, vans and cars. The figures also show:

• Hollywood showed a slight decrease this year in the number of overall homeless people, living on its streets and in shelters compared to 2016. About a third of the 1,138 unsheltered people live on the streets.

• In Van Nuys, homelessness increased from 474 people in 2016 to 519 this year. But most people transitioned into some sort of makeshift shelter this year, compared to last year.

• Upscale neighborhoods such as Bel-Air, Beverly Hills, and Malibu all saw increases in homelessness. Most homeless people in those communities sleep in vehicles.

•San Marino, unincorporated Avalon, and Calabasas/Hidden Hills were among those that reported no homeless people.

The data shows in more detail how the campers and cars that the homeless are living in are spread out throughout the city.

Clementina Verjan – LAHSA’s associate policy and planning director, and the coordinator of the homeless count – said that this year’s data showed an increase in the number of people who have newly fallen into homelessness, and that can be seen in the spike in people living out of vehicles.

“The number of people living in vehicles really increased,” Verjan said. “People tend to stay in their vehicles as a last resort before they end up in an encampment on the street.”

She noted that with the latest data, which breaks the larger homeless count numbers down to the neighborhood level, “the community itself will see there is a need for some type of housing for our homeless population.”

She noted that when someone becomes homeless and needs housing or shelter fast, the only option often is to send them outside of the Los Angeles area, such as the Antelope Valley or to places in the county that have concentrations of services, such as downtown Los Angeles, even if they prefer to stay in their own community to be near their job or to allow their children to attend the same schools.

In the San Fernando Valley, the homeless population tends to center around the North Hollywood area, which is where one of the area’s major homeless services provider, LA Family Housing, is located, Verjan said.

The data released Friday also includes people who were living in shelters, but did not include unsheltered youth experiencing homelessness, such as those 18 to 24 years old.

A tight housing market, high rental costs and more women and youths escaping violent domestic situations contributed to the overall 23 percent spike in homelessness this year, according to data provided by LAHSA earlier this year. The increase came even though 14,000 people were placed in housing last year.