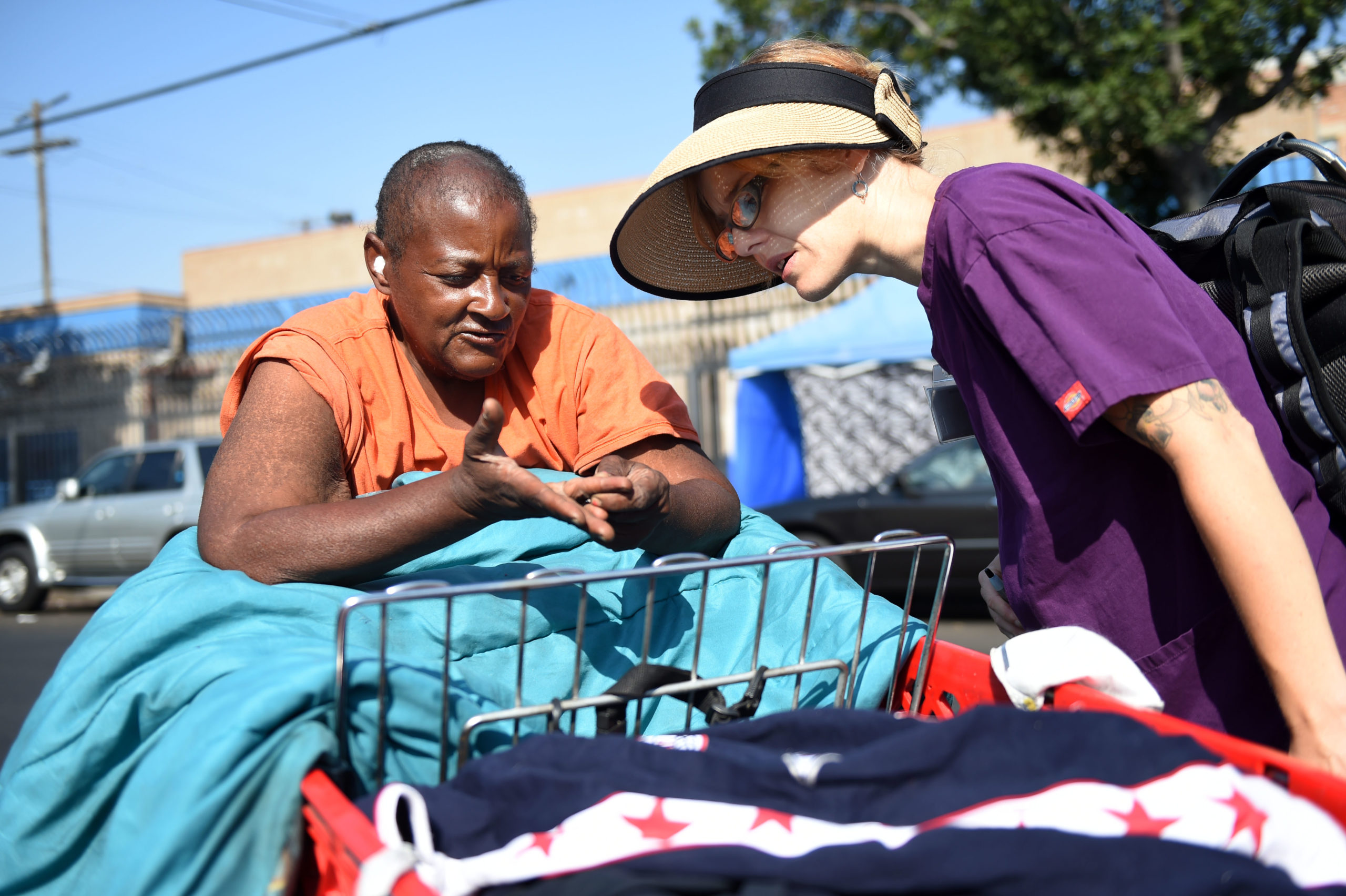 Majeedah Wesley was less than two months into her education at Long Beach City College when she became part of a growing statistic among the ranks of college students in the United States. She was homeless, more than 400 miles from her family and determined to finish her education.

Wesley began making daily commutes from the Covenant House in Hollywood, a non-profit dedicated to providing housing to homeless youth, often spending hours in both directions on public transit to attend her classes at LBCC, and also carry out her duties as associated student body president.

Being homeless and trying to complete a college degree is not easy, and that’s why for most people in her situation it’s not uncommon for the college dream to give way to working full-time or worse. But with the help of the college’s current support structure—grants, donations—she was able to graduate.

“It makes it pretty impossible for most people,” said Wesley, who has since moved onto a four-year university. “I think people thought I was crazy because, in my situation, I had family in the Bay Area and even though I grew up in a situation where there was a lot of domestic violence, I still kind of could hop on a Greyhound and go and be under a roof and have food in my stomach.”
<div>A recent provision tied into the passing of Measure H funding—a 10-year sales tax increase expected to generate hundreds of millions annually going toward homeless services—by the Los Angeles Board of County Supervisors may help alleviate the strain on homeless students in the county, and on the colleges they attend.</div>
A motion introduced by Supervisor Janice Hahn, whose Fourth District includes Long Beach, directs a report to be compiled to identify how funding from Measure H can be used to help homeless college students, including rapid rehousing opportunities.

“No one should have to choose between their education and a place to sleep at night,” Hahn said in a statement after the board’s vote in June. “Yet that is exactly the choice facing many students in LA County.”

The extent to which the problem persists on the campuses in Long Beach is not clear. A <a href=”http://wihopelab.com/publications/hungry-and-homeless-in-college-report.pdf” target=”_blank” rel=”noopener noreferrer”>national study released in March</a> examining food insecurity and homeless issues among college students found that two-thirds of community college students suffered from food insecurity and nearly 14 percent were homeless. The figures were derived from a survey of 33,000 students on 70 campuses across 24 states. A separate study conducted by Cal State Long Beach last year found that one out of 10 CSU students was also homeless.

Long Beach Community College District Trustee Virginia Baxter said that a recent study conducted on LBCC campuses showed that figure to be about one out of 15 students (6.67 percent), but acknowledged that figure could be higher.

Baxter said the study found 500 students on campus who were living in transitional housing, sleeping on a friends couch or even in their cars. Through an associate group inside the LBCC Foundation called Helping the Homeless, Baxter and Trustee Sunny Zia have made efforts to help the homeless students on campus through a variety of avenues.

Food banks are available on both the Pacific Coast and Liberal Arts campuses, and through donations, some reaching into the tens of thousands of dollars, they’ve been able to provide assistance with rent, school books, transportation and groceries. In complying with state law, the school’s gyms are open to homeless students who might need to use the shower facilities. But housing, at least on the scale in which the Measure H funding might provide, is something the college cannot provide.
<div></div>
“People in Long Beach really care,” Baxter said, referencing an email she had sent out soliciting donations to help pay for a deposit and first month’s rent on an apartment for a student. “I had three people call me and help here in about an hour after sending out the email.”

Baxter and Zia both give part of their stipends toward two annual scholarships, with $1,000 helping one homeless student per year and another $1,000 going toward helping an English language learner student.

Zia, who Wesley said took her under her wing after the trustee learned that she was homeless, said that by meeting the very basic needs of a student—housing, food, transportation—the student is then able to flourish and work toward their educational goals. She noted the work of the homeless program on campus but said more needs to be done to ensure that students have a roof over their heads.

“None of that is significant enough, in my opinion, in comparison to really housing someone,” Zia said. “It was really a bandaid on a cancer. With housing, now we’re talking about a place where they’re feeling secure, and then the scholarship and the tuition support can really accelerate them on the path to success.”

Zia was present at the Board of Supervisors meeting where it voted to approve the billion dollar plan to fund homeless programs in the county over the next decade. She advocated for the board’s approval of the motion as a means to help students avoid “choosing an education over a meal.”

Sherri Zampelli, an instructor in the school’s human services department and member of the Helping Homeless Students board, said that often times these students do drop out. If not for being homeless, than other factors like not having access to computers or internet can impact their course work.

Zampelli said that dollars are important but purpose is a large factor that can’t be overlooked in the situations of these students. She’s worked at the college for the past two years but has spent 25 years in the human services field and says she’s seen numerous students overcome “things you can’t imagine.”

A little money can go a long way, but she says you can’t really quantify the power of hope. While a scholarship for a few hundred dollars might not mean much to people in better socioeconomic situations, that money often represents more than just the numbers on a scholarship check.

“It just doesn’t really go very far in today’s economy,” Zampelli said, referring to the size of some scholarships granted by the school. “But many of these students, they come from a background where nobody believed in them. They’ve just been pushed down, pushed down, pushed down for so long, their spirit is so damaged, that for them $750 is enough for them to soar. They’re like ‘somebody believes in me, I really can do this.’”

How much money will eventually be funneled into the rapid rehousing of community college students in the county is unclear. A request for comment from Hahn’s office on the anticipated funding allocation and timeline for any monies dedicated to the motion went unreturned.

But for those that have navigated the world of being homeless and in college the impact is clear.   Wesley, who has since graduated from LBCC and is currently enrolled at Texas Southern University in Houston where she’s majoring in finance, said that many students aren’t able to weather the realities of being homeless and without the proper resources to succeed in school.

Often they make the choice to work and lead “somewhat normal lives” rather than skipping meals to study and riding hours on buses and trains from a shelter to school every day. It’s not an ideal situation she said, but with help from the county it could give a lot of people a shot at succeeding.

Wesley, who once lugged her belongings from Hollywood to Long Beach daily to attend school, is intent on pursuing a juris doctorate degree in intellectual property law after graduating from Texas Southern.

“It’s going to have a lot of impact because I don’t think everyone is as crazy as I am to take the train for hours and hours a day when you’re faced with so many different options,” Wesley said. “You can do so many other things than go to school. I think it’s going to give so many other people a pass to education and I think that it’s going to help with society as a whole.”