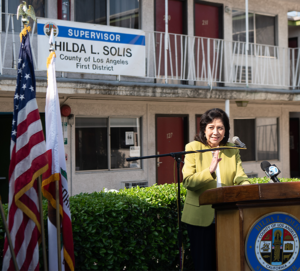 “As a resident of the City of El Monte, I am proud of this City’s leadership in finding solutions to homelessness at the local level,” said Supervisor Solis. “At the start of the pandemic, the City of El Monte welcomed Project Roomkey to protect our most vulnerable residents from COVID-19. And building on that success, it’s wonderful to celebrate their purchase of two motels through the State’s Project Homekey program. It is because of the leadership of cities like El Monte that I have been an advocate for getting more funding to municipalities across the First District and County who are willing to step up in support of our unhoused neighbors.”

The two motels have a total of 133 beds: 93 rooms at the M Motel (10024 Valley Blvd, El Monte, CA 91731) and 40 rooms at the Budget Inn (10038 Valley Blvd, El Monte, CA 91731). The M Motel will operate as temporary housing for homeless families over the course of five years, and then transition to permanent supportive housing in during year six. The Budget Inn will operate as an emergency shelter prioritizing transition age youth. These two Project Homekey sites can provide housing for of 133 individuals – 30% of the City’s homeless population.

“The City of El Monte is grateful to Governor Newsom for launching this transformative program,” said Alma Martinez, City Manager for the City of El Monte. “We were honored to lead the way in sheltering our most vulnerable under Project Roomkey during the beginning of the pandemic. But receiving this funding to convert two motels within our city will truly allow us to pave the way in addressing the homelessness crisis.”

“We have a humanitarian crisis across our region,” said Cheri Todoroff, Executive Director of the LA County Homeless Initiative. “And the 88 cities within this County need our support now more than ever to improve the lives of our unhoused neighbors. It’s inspiring to see what investments in smaller municipalities can do to help move the needle in securing safe spaces for those most vulnerable. We see that through these two projects, and the LA County Homeless Initiative looks forward to partnering on more.”

The M Motel currently serves 39 individuals. On-site wraparound services at the M Motel are currently managed by Union Station Homeless Services, a nonprofit organization based in the San Gabriel Valley committed to helping homeless individuals and families rebuild their lives.

“Union Station Homeless Services is thrilled to partner with the City of El Monte in opening Motel M, a new Project Homekey site,” said Anne Miskey, Chief Executive Officer for Union Station Homeless Services. “This initiative provides bridge housing and stability for over 40 people experiencing homelessness in our community. Our 50 years of experience has shown that the combination of housing, plus wrap-around services such as physical/mental health and addiction support, job training, and connection to community are highly effective in permanently ending homelessness for individuals and families. We are grateful to the City of El Monte and Supervisor Solis for their support of this project, and for working together to end homelessness in El Monte.”

In addition to Project Homekey funds, the City of El Monte also leveraged $5.67 million of federal Emergency Solutions Grant program (ESG) funding to purchase both motels. Moreover, the City received $6.6 million from the State’s Community Development Block Grant-Coronavirus (CDBG-CV1) funds to complete renovations at both sites. The City of El Monte also received philanthropic funds from Kaiser Permanente and allocated $5.1 million of their own American Rescue Plan allocation from the federal government for these projects.

Housing for Veterans in North Hills